The end of summer means Back to School, Last Little Get Aways and Glorious Sunsets which herald more sunny days ahead. I have always loved this time of year, which has always seemed like the ‘real’ new year to me.   The beginning of each school year has always been filled with excitement and the anticipation of something new and better.  When I was young I was always sure that this was going to be the year I made the team and got straight A’s as well as the cute boy, ever the optimist. Fall also serves as a marker for where we are in our lives, sort of a  growth chart in time.  When my boys were young I  met each new school year with the disbelief that they were one grade older, each new grade a momentous step, coupled with an almost giddy joy that they were going back to school and I could finally get something done-call it a guilty pleasure.  Now that I am less married to the school calendar, since my kids are in college and beyond, I am still reminded of the season by my garden which is  abundantly rich with bounty but showing some signs that summer is ending.  It’s almost time to prepare for the cold of winter, but not quite yet…still many beautiful days ahead.

This lovely salad started with a Martha Stewart Living recipe for Blistered Eggplant with Tomatoes, Olives and Feta which I stumbled upon while thumbing through the September, 2014 issue.  I was immediately drawn to the colorful assortment of some of my favorite vegetables and decided to give it a try but, as they say on American Idol, ‘make it my own’. Those of you that know me well, understand that, unless I’m baking, I consider recipes to be merely suggestions and I tend to cook a bit on the fly with what I have on hand.  The original recipe calls for only a drizzle of olive oil with salt and pepper but I opted to let garlic and fresh herbs rest in the olive oil with a splash of balsamic vinegar while I prepared and roasted the vegetables.  I also roasted red and yellow bell peppers because I thought they would enhance the other flavors with their natural sweetness. The combination of charred eggplant and peppers with sweet, ripe tomatoes, tangy olives, fresh herbs and creamy goat cheese is a wonderful taste sensation. The goat cheese is optional, in fact my husband doesn’t care for it so I placed the goat cheese in a corner  of the tray so vegans or non-goat cheese lovers don’t have to pick through the salad for something ‘safe’.  Sprinkle some freshly chopped basil for a final fresh garnish.

TIP:  Eggplant is usually sliced and then salted (a process called ‘degorging’) before cooking to remove any bitterness and to help draw out the extra water which prevents the eggplant from acting like a sponge and absorbing great quantities of oil or marinade or releasing unwanted water into the dish.  However, with this method of cooking, sometimes called blistering or charring (i.e. dry roasting), salting is not as necessary if the eggplant is fresh, as the high heat of the broiler dries the slices out enough.  Older, tougher eggplants will really benefit from salting though.  So if you have fresh eggplant and don’t have time, skip the salting process.  Adding the oil after roasting gives the eggplant a nice texture and enhances the slightly smoky, charred flavor.

For those eggplant lovers, you might want to try some of my other eggplant favorites.  Just click on the photo for the recipe. 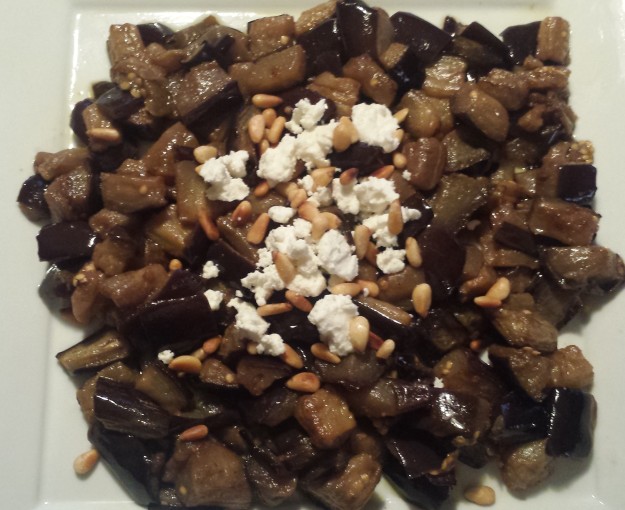 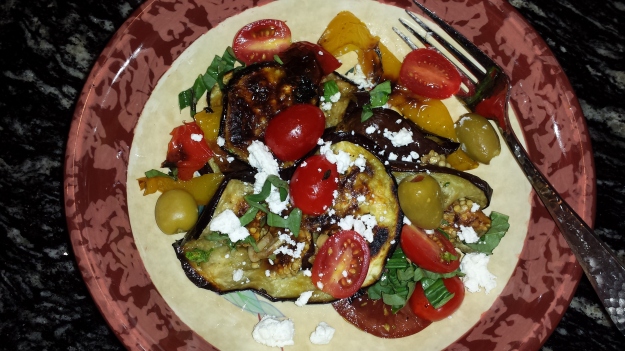